Michigan has more than its share of big moments in labor history -- the Flint sit-down strike and the Battle of the Overpass stand out.

Christmas Eve 2013 marks the 100th anniversary of another moment in labor history that must not be forgotten.

In the early 20th century, copper mines in Michigan's Upper Peninsula were booming. Copper was in high demand as the United States electrified its cities, businesses, and homes. The Calumet and Hecla Mining Co. was raking in money off the backs of immigrants who were forced to work 10-hour days, six days a week in dark, dangerous conditions for subsistence wages. In 1913, the company came up with a way to make even more money by eliminating the jobs of about half the workers. It instituted the use of a 150-pound drill that would be operated by only one worker instead of two. Not only would jobs be lost, but a worker injured on the job would be alone in the dark mines. The job was already the most dangerous in the nation at the time, with fatality rates of one out of every 200 workers.

The Western Federation of Miners organized the mine workers and in the summer of 2013 the local workers decided to strike. The work stoppage dragged on through the fall and into winter as C&H brought in scabs to try to break the strike. With just $23,000 in its strike fund when the stoppage began, the union was no match for the deep pockets of C&H, which was backed by an army of company thugs and the Michigan National Guard.

Living in cold homes with nothing to eat, the strikers held on. To try to bring a little cheer to the families, a party was organized for Christmas Eve in the upstairs room at the Italian Hall in Calumet. As many as 700 people were crowded into the hall, singing Christmas carols as small gifts solicited from area merchants were given out to the children..

Suddenly, someone came to the top of the steps and yelled, "Fire." There was no fire, but the alarm set off a stampede for the narrow stairway to the exit. Someone fell on the stairs and then more people, bodies piled up in the stairwell,suffocating those on the bottom.

When it was over, 73 people had died, most of them children.

The tragedy and the mass funeral attracted national attention. Even C&H felt a little ashamed and secretly tried to offer $5,000 to the families of the dead. Citizens in the town took up a collection and went around to the families offering them money. But the miners refused the money, saying, they didn't want charity, they wanted justice.

Ultimately, the families and the miners received no justice. Union President Charles Moyer sent letters demanding an investigation into the mass murders, but thugs from an anti-union citizen group called the Citizens Alliance beat him and shot him. There was never an adequate investigation and the identity of those who raised the false alarm has never been determined, although Moyer believed the man wore a Citizens Alliance button. The strike ended in the spring. Miners went back to work. 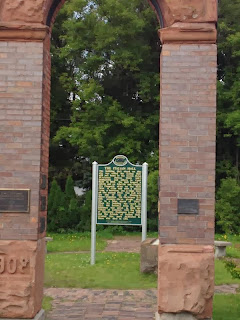 The Italian Hall no longer stands. The city of Calumet tore it down, perhaps not wanting to look at the reminder of the tragedy anymore. But an historical marker stands between the arches of the front entry hall with a brief history of the tragedy. 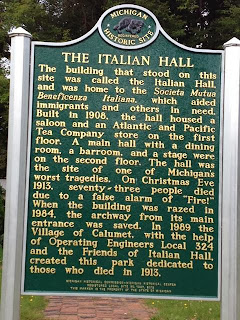 Ultimately, the mines closed as they found it hard to compete with cheaper open-pit copper mining in the Southwest. So there is no happy ending, no triumph for the cause of working people in this story.

But there is one reminder. We can make the union's response to the company's $5,000 hand-out or own motto. We don't want charity for low-wage workers. We want justice.
Posted by Judy at 7:29 AM